Gallery owner, artist and ceramics instructor Heidi Loewen is a goofball, but don’t take my word for it.

“My one rule,” she likes to say, “is that you cannot take a class from me unless you have a sense of humor. It can be dark, weird, whatever. You just need to have one.” Would it be true, then, to say she doesn’t take herself too seriously?

“I take my art and my work extremely seriously,” she emphasizes. “Myself? No. I don’t take myself too seriously.” 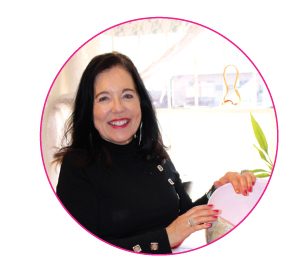 Loewen grew up in Rochester, New York, with parents who encouraged their daughter’s creativity. Weekends were spent meandering museums and art galleries, where a precocious Loewen first became enamored of designer Wendell Castle (perhaps best known for furniture). Her first experience with clay was thanks to a class she took as a 10-year-old, and she remembers instantly falling in love with the malleable material. An avid classical musician, Loewen thought of becoming a concert pianist, but instead studied art at Skidmore College, interned at the Metropolitan Museum of Art, traveled to Switzerland to take art history classes at the Sorbonne and eventually returned to New York, where she worked at Sotheby’s before managing a private art collection in Boston.

While taking pottery classes at Harvard, she realized she wanted to work with clay full-time; Santa Fe felt like a natural next step. When she moved here in 1992, she first taught ceramics at St. John’s College and Santa Fe Clay before opening her own space four years later. Heidi Loewen Fine Art, her gallery and school, has been on Johnson Street—next to Shohko Café and up the street from the Georgia O’Keeffe Museum—for 26 years.

During a recent visit to the gallery, candles twinkled, soft music played and the wine flowed, uncorked with the help of a rhinestone-encrusted bottle opener. “I love pink wine,” she said, pouring a glass, “because it tastes like drinking bubble gum!” Pointing out tiny, palm-sized dishes, she said, “I call these M&M bowls, because you could stash some in there. You could put your diamonds in there too.”

Loewen says things like this all the time, along with words like “toots” and “sweetie;” “appeteaser” instead of appetizer, and “turkwozzzz” instead of turquoise. It might be corny if it didn’t feel so obviously part of her natural demeanor.

Loewen will be ArtSmart’s 2019 Artist of the Year; the 25-year old local nonprofit offers scholarships to high school seniors, donates art supplies to public school students and generally fosters a range of creative activities for Santa Fe kids. Past honorees have included Richard Tuttle, Rebecca Tobey and the late Agnes Martin, who have acted as both mentor and instructor, donating their time to teach high-schoolers the techniques of their particular artistic trades. Loewen, who’s been teaching private ceramic art classes for decades, should be a natural.

“Painters can work alone just fine, and might work better that way,” Loewen tells SFR. “I think ceramic artists like to be together.” With this philosophy, Loewen teaches classes of up to 20 or so people in her intimate gallery space. Instruction begins with a brief demonstration before students work at their own wheels. They may slice, curl or even karate chop their work, which Loewen then fires and glazes or gilds according to the student’s choice, and delivers later.

In her own creative practice, Loewen combines wheel-thrown porcelain with innovative design, resulting, for instance, in a vase whose demure, shell-pink exterior is interrupted by a folded-open split, revealing shimmery, 22-karat gold-leafed insides. “A lot of my favorite things come from mistakes,” she says. Clay, certainly, is an ideal medium; if something isn’t working, squish it up and start over. The twisted, skinny porcelain pieces around her study, which she calls “tangos”—gold-leafed, painted, or glazed—gave me pause. Later, I realized they’re the cut-away, uneven rims of pots. “I love that they are ribbons of clay removed from the top of big bowls,” she said. “The tangos could be considered mistakes. Not by me.”

Many ceramic artists make work designed to be functional, but much of what Loewen creates is purely for decorative purposes. An example is her series of tiny high-heel stilettos, whose ceramic bodies are adorned with feathers, leopard-print fur, lace and gemstones. In a send-up to Louboutin, undersides are bright red, and many have gold-leafed interiors; they’re named things like “Tina” (after Turner) or “Come Prance With Me.” For a monumental high-heeled red shoe which Loewen showed at Miami Basel’s Spectrum Art Fair in 2015, she used fire engine-red automotive paint instead of glaze, and adorned the 6-foot heel with crystals and fur.

It sounds ridiculous—and it is, and thank heavens. In not taking herself too seriously, Loewen urges us to do the same. Oh, and that red shoe? It ended up winning one of Spectrum’s coveted Best Sculpture Awards. 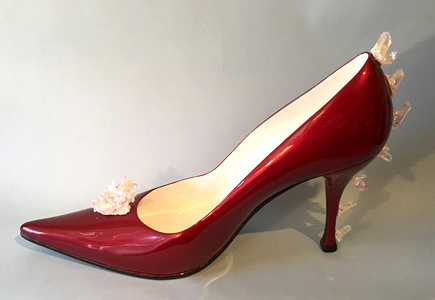 ©Heidi Loewen – It’s the Shoe That Makes the Woman

Celebrate the rooftop installation of Heidi Loewen’s 6-foot, ruby-red stiletto heel sculpture, It’s the Shoe That Makes the Woman, at her gallery and school. Loewen hosts receptions on Friday, Aug. 18, from noon to 8 p.m. and on Saturday, Aug. 19, from 11 a.m. to 6 p.m. The sculpture took first prize at the Spectrum Miami Art Show in 2015.